DEBATE: another article in The Guardian


A high-quality debate of a sensitive topic did not disappoint, as all panellists bar one accepted the scientific consensus 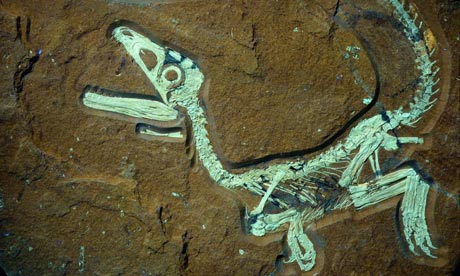 'Oktar Babuna unintentionally served as a comic relief, when the audience realised that almost all of his responses included the mention of fossils.' Photograph: Helmut Tischlinger/DPA
An imam of an east London mosque, Usama Hasan, received a death threat for arguing in support of human evolution two years ago. On Saturday, London played host to a riveting intrafaith dialogue on Islam's stance on the theory of evolution. The east London imam was one of the speakers – but this time there were others who shared his viewpoint.
The event, organised by the Deen Institute, was titled Have Muslims Misunderstood Evolution? The speakers included an evolutionary biologist, a biological anthropologist, two theologians and a bona fide creationist.
It lasted seven hours, yet almost everyone stayed till the end. There were more than 850 people in the audience and even though the topic was sensitive and controversial, there was no heckling or disruption. At least from my limited interactions, it seemed that the audience was comprised mostly of young professionals. Most had no strong opinion, but their interest was evident as they were willing to spend their entire Saturday hearing about Muslim positions on evolution.
They were not disappointed.
Conversations at events such as these are often derailed by the unscientific rhetoric and common misconceptions of creationists. The success of this event related to the fact that all panellists, with the exception of a creationist, more or less accepted the scientific consensus on evolution. This allowed the discussion to centre on the question: can Muslims reconcile human evolution with their faith?
I think it is important for Muslims (and non-Muslims) to know that there are Muslim scientists who not only understand evolution, but have also thought about its implications for their own personal religious beliefs. Ehab Abouheif is an evolutionary biologist who holds the Canada research chair at McGill University and works on ant evolution. He laid out the scientific case for biological evolution and spoke about the need for Muslims to understand this bedrock principle of modern biology. He used the example of his own personal faith to counter the misconception that one cannot reconcile evolution with Islam.
Fatimah Jackson, an African American convert to Islam, is professor of biological anthropology at the University of North Carolina. Her research focuses on anthropological genetics and human biological and biocultural variability. She knew and taught evolution before her conversion to Islam in the 1970s and has never considered the two to be in conflict. She took the position that science only tells us "how" things happen, and not "why".
Both Abouheif and Jackson are outstanding researchers who accept the mainstream scientific view on evolution. They are excited about their work and unwavering in defence of their faith. They are role models for any budding Muslim scientist.
The London event also featured a theological debate between Usama Hasan and Shaykh Yasir Qadhi. Hasan is a fellow of the Royal Astronomical Society and is the imam who was threatened two years ago for his support for human evolution. He reiterated his position and argued that there was indeed room in Islamic theology to accommodate human evolution.
Qadhi, on the other hand, accepted all of evolution except where it applies to humans. However, he conceded that the "maximum we can go" from an Islamic theological perspective is to say that God inserted Adam in the natural order. To explain his position, he used the example of dominos. He asserted that Adam was the last domino placed directly by God. From his perspective, believers would see this last domino as a miracle of God, whereas non-believers would see a causal connection from all the other dominos. This way, the miracle of Adam is preserved theologically.
The high quality of scientific and theological discussion exposed the shallowness of Islamic creationists, such as Harun Yahya. One of his acolytes, Oktar Babuna, presented his arguments from Istanbul, via the internet. He kept on pointing to fossils as evidence that species have never changed in history. He also discounted any historical changes in the DNA. Babuna's arguments were countered earlier on by both Abouheif and Jackson. But he unintentionally served as a comic relief, when the audience realised that after several hours of discussion, almost all of his responses included the mention of "fossils", irrespective of the topic of discussion.
Babuna aside, this was a serious debate on an important topic. The rejection of evolution in the face of scientific consensus stands as a Galileo moment for Islam. However, the tone of the debate and the quality of intellectual exchange at the London event is encouraging and it shows modern Muslims have the maturity to address a perceived challenge from a scientific idea.
Posted by Abouheif Lab at 7:12 AM