The 6th ant genome was published today in PloS Genetics. Lead by Dr. Garret Suen and Dr. Christopher Cameron, University of Madison, Wisconsin, the genome of the remarkable leaf cutter ants has now been decoded. Leaf Cutters are arguable the most remarkable organisms on our earth today and have invented agriculture more than 10000 years ago!

PLoS Genetics is an Open Access Journal - you can download the paper at the following link: http://www.plosgenetics.org/article/info%3Adoi%2F10.1371%2Fjournal.pgen.1002007
Posted by Abouheif Lab at 3:02 PM No comments: Hassan AzzazyCourtesy H Azzazy
As protests continue in Egypt against President Hosni Mubarak, Hassan Azzazy, a chemist and associate dean for graduate studies and research at the non-profit, private American University in Cairo, tells Nature how research and education have suffered under the regime.

What is your assessment of the Mubarak regime's track record in research?
What record? I am not sure that a government that uses plain-clothes police and thugs to crush protests and kill peaceful protesters would even understand what scientific research means. The current outdated government simply lacks the mindset and vision to strategically support scientific research and lead an innovation-based economy that can compete globally. This is manifested by the lack of necessary infrastructure and national policies and mechanisms to support scientific research and provide effective higher education.
How many meaningful scientific publications come out of Egyptian universities and research centres? How many patents? Most importantly, how many patents have actually resulted in spin-off companies? This is definitely not because of a lack of bright Egyptian scientists, as they perform very well in Europe, Japan and the United States. It is amazing that Egyptian universities lack intellectual-property policies and mechanisms to create spin-off companies. Compared with, say, India and Israel, scientific research in Egypt is lagging behind by decades.

“Egyptian universities currently do not foster productivity or innovation.”

There is minimal collaboration between industry and academia, and an absence of industrial support for science research. This is mainly because industries in Egypt, including the pharmaceutical industry, are not based on innovation but on licensing technologies from multinational companies. Biotechnology and nanotechnology industries are currently almost non-existent in Egypt.
That said, the past couple of years have witnessed some progress in scientific research and selected academic areas, thanks mainly to European Union funds, especially Tempus projects [to modernize higher education], and a smaller amount of US funding. The establishment in 2007 of a national Science and Technology Development Fund, funded by the Egyptian government and some European countries, is also positive. It is the first body in Egypt to award funding based on competitive grant proposals, and disburses around 200 million Egyptian pounds (US$34 million) annually. But there is still no serious comprehensive strategic plan to support effective scientific research to address urgent national needs in the fields of health, water, energy and food.

What is the state of the country's universities?
University graduates simply lack the basic and professional skills needed by the current job market. Curricula are outdated and disconnected to market needs, classes are overpopulated, laboratories are poorly equipped, departmental budgets for chemicals and supplies are minimal and professors' salaries are low. University students essentially have no rights. Egyptian universities currently do not foster productivity or innovation. They are simply assembly lines that produce thousands of unskilled graduates every year.
There are many highly qualified professors and researchers, but they are excluded from key academic positions if they are seen as not being sufficiently loyal to the current regime. This has crippled trust in academic freedom and confidence in the system.
The brain drain is also a very serious and worsening problem, and many highly qualified researchers have left Egypt permanently because of the repression of human rights. In the past, Egypt lost its brains to Europe and North America. Now Egypt is losing many more to state-of-the-art research centres and universities established recently in the Middle East and Asia. The scientific research environment in Egypt is, at present, incapable of attracting Egyptian researchers or other brains from abroad.

“Researchers are key to the stability and success of Egypt.”

What do you see as the main opportunities and challenges for improving higher education and research in Egypt?
The main opportunity is in the brains and innovative talents of its huge number of university students and researchers. They need to be empowered to address national and international challenges. We academics are supporting the current protest movement by all possible means, and we will continue doing so until its fair demands are met.  Jump-starting scientific research in Egypt requires reform of higher-education curricula to meet market needs, and a strategic national agenda for scientific research that has substantial and focused resources from government and industry. Egypt does not need external support to fund its own reforms of higher education and scientific research. A small percentage of the annual budget of the presidential guard, or of the money acquired by corrupt fat cats in the ruling National Democratic Party, would do the trick. The return of key brains to Egypt is also necessary. Researchers are key to the stability and success of Egypt.
Posted by Abouheif Lab at 9:08 AM 1 comment:

Dear Abouheif Lab and Colleagues,
Here is a picture of the Konrad Lorenz Institute for Evolution and Cognition Research in , Altenburg, Austria: 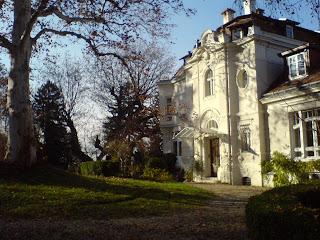 I will be here until 1st August 2011. It is a marvelous place for thinking and writing. This was summer home of Nobel Laureate, Konrad Lorenz. Set in the country side of Vienna and next to the Dannube, it is an idealic setting for writing and thinking. the visiting professors and postdoctoral fellows are remarkably broad in their interests and are quite smart. I am inspired! More soon on my next entry from Austria!
Warm Regards,
Ehab
Posted by Abouheif Lab at 6:35 AM No comments:

Posted by Abouheif Lab at 3:57 AM No comments:

The Abouheif Lab was involved two of the three ant genomes published today in PNAS. This marks another landmark event this year in ant genomics and brings the total count to five! Here are the studies:


Posted by Abouheif Lab at 3:55 AM No comments: