The importance of Evolution and Islam debate in London 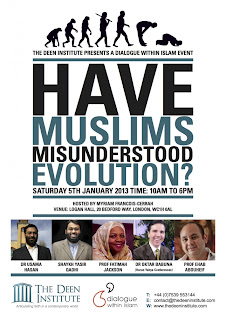 I'm now back in US and I'm glad that I had a chance to attend the London debate, Have Muslims Misunderstood Evolution? It was organized by The Deen Institute and I postedsome quick thoughts on Saturday.

You can find a good summary of each speaker's presentation at Farrukh's blog.

Here are a few reasons why I think the London debate on evolution and Islam may turn out be a game-changer in the way Muslims look at evolutionary biology, and science, in general.

This was an intra-faith debate. There is no question that the topic was controversial. However, the conversation on evolution is often derailed by common misconceptions and juvenile creationist ideas. The debate would have been a failure, had it been simply between biologists and those who follow Harun Yahya. There is no common ground - as Yahya's group has no understanding of science.

The reason for the success of the debate was that almost all of the speakers (with the exception of Harun Yahya acolyte, Oktar Babuna) accepted the scientific consensus on evolution. Then the question became: Can Muslims reconcile human evolution with their faith? Now this is an important question.

Here are a few take-aways from the London debate:
1. It is crucial for Muslims (and non-Muslims) to know that there are Muslim scientists out there, who not only understand evolution but have thought about its implications for their own personal faith. Both Ehab Abouheif and Fatimah Jackson talked about their own personal belief and the way they reconcile evolution, in particular, human evolution, with Islam. What is important here is that they accept mainstream evolutionary ideas - and not some fringe ideas of directional evolution or the American version of Intelligent Design (ala Irreducible Complexity of bacterium flagellum). No - instead, they are first rate researchers who take a no nonsense approach to science, and a no nonsense approach to religion. Fatimah Jackson, a convert to islam, teared up when talking about her faith - and she emphasized that no one can question her Iman. She took the position that science tells the how - and not the why.

Both Ehab and Fatimah are spectacular role models for budding Muslim scientists. When a genetics student asked about potential experiments to test evolution, Ehab invited him to joinhis lab, which is doing cutting-edge research on ant evolution (he has two papers in published in the prestigious journal Science just in 2011!).

2. The theological debate between Usama Hasan and Yasir Qadhi was also interesting. The important thing to note is that both accepted the science of evolution. Usama Hasan's main position was that science is clear on human evolution as well and Islamic theology has room to incorporate it. Yasir Qadhi, on the other hand, said that he has no problem with almost all of evolution, except for human evolution. However, he made it clear that he is not speaking on the science of human evolution, but rather on human evolution from an Islamic theological perspective. He went after Usama, and I think, he was a quite condescending towards him. Though to be also fair, Yasir Qadhi had also come really prepared for the debate. But if you listen carefully, the difference in their positions is razor-thin.

Why do I say that? On the one hand, Yasir Qadhi insisted that theologically, Muslims cannot accept human evolution. On the other hand, he said that the "maximum we can go" from the theological perspective is to say that Allah inserted Adam in the natural order - and while we may not see any difference, it is actually a miracle. He used the example of dominos. He said that Adam was the last domino. Now, in his perspective, we are seeing the last domino, and that domino is specially placed by Allah. However, for non-believers, it may seem to be connected to all other dominos. This way, the miracle of Adam is preserved.

Usama and Yasir could have easily agreed on this point. However, it seemed to me that Yasir was insistent on inflating the differences between his position and Usama's. As it turns out, they both know each other from ways back, and their rivalry goes beyond the topic of evolution. Overall, Usama was interested in emphasizing the lessons from history about the changing religious (including Islamic) interpretations in wake of new sciences (for example, earth-centered to sun-centered universe), whereas Yasir was focusing on a close textual reading of the text, claiming that this current interpretation is really definitive.

But notice that overall, this is a subtle debate on the theological acceptance/rejection of human evolution only. Even if one takes a conservative position, almost all of evolution is okay for both of them.

3. The audience was diverse and deeply interested in the topic. There were 800 people in the packed auditorium. The talks started at 11am and went till 6pm (with lunch and prayer breaks), it was amazing to see that almost all of the audience stayed until the end. This is all the more amazing since most people lined up to get in the auditorium from 9am. Plus, there was no heckling or disruption. This was a very civil debate on a controversial topic. A lot of it had to do with the host, Mariam Francois-Cerrah. She was fantastic in getting the debate out of hand, and in handling the questions.

But what struck me the most was the diversity in audience members. There were some whose religiosity was explicit (with hijabs, niqabs, beards, etc) and there were others that did not show that. In conversations, I found a film-producer, a pharmacist, a philosophy undergraduate, a chemist, a science communication professional, a hedge-fund manager, an IT professional, a medical doctor, a nurse, a genetics student, a biology postdoc, etc. Most of them were there to simply hear the debate. None of them had a strong position on evolution, one way or the other, but were interested in hearing Muslim positions on it.

4. The debate exposed the shallowness of Harun Yahya brand of creationism. Those of us who follow Islamic creationism have known this for a while (for example, see the crude quality of his Atlas here). However, the media had often portrayed him and his group as the leading "intellectual voice" of Islamic creationism. However, they only have a few talking points: Evolution is an evil ideology, evolution is false, quoting Darwin out of context, and a constant reference to fossils. Well, Ehab Abouheif in his opening remarks did a fantastic job of neutralizing most of their arguments by showing the common misconceptions about evolution.

This would not have been enough had the debate lasted only hour. People who are not familiar with the debate would have seen two people disagreeing - and would have left undecided. However, the conversation went deeper, in particular with the introduction biological anthropology by Fatimah Jackson and then a historical and philosophical discussion between Usama Hasan and Yasir Qadhi. The response of Oktar Babuna was - "fossils". The conversation had moved along - but Babuna had nothing new to add. And the audience figured it out. Towards the end, Oktar Babuna was serving as a comic relief. Other panelists would be talking about something substantial, and Oktar Babuna would bring up his fossils. People were rolling in their seats with laughter. I even started feeling bad for him towards the end.

The bottom line is that the Yahya position of no evolution at all (and with almost no change in the DNA) is akin to those who still believe in a universe where the Sun goes around the Earth. Yahya people have been able to gain traction by using evolution as a synonym for atheism and eugenics and by presenting evolution as an ideology pushed by non-Muslims against Islam. Their claim to present an alternative "scientific" idea, however, did not work when they were confronted by world class Muslim biologists. Furthermore, they don't offer any sophisticated theology either.

London is one of the strongholds of the Harun Yahya group amongst Muslims (much more so than most of the Muslim world). The debate may have permanently exposed their shallowness in both Islamic theology and Islam. And yes, even in the evolution debate, Oktar Babuna brought up Mahdi, and the End of Times. (see earlier post on Harun Yahya's fascination with Mahdi and if sees himself as The One).

5. Ultimately, this was a grown-up debate. This shows a maturity within Islam on dealing with a serious challenge from a scientific idea. Instead of a knee-jerk reaction, The Deen Institutemanaged to bring together a fantastic panel that engaged with the topic. And this can as a good model for other issues as well (freedom of speech, gender equity, etc.). I'm curious to the see the direction they will take after this event.

There is going to be a circus reaction as well. There will be some who will be upset by the debate. The Harun Yahya people will also go on the offensive and may try to manufacture a controversy. It will be unfortunate, if the press focused on some of the outliers.

This is a long post - but I think this was an important event.

Related posts:
A Riveting Session on Islam and Evolution in London
Opposition to Evolution and Islam Debate at Imperial College?

Here is a picture of a section of the crowd at the debate: 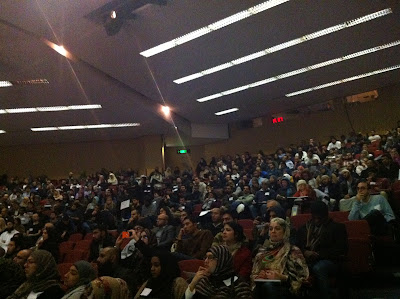 And here are the speakers along with couple organizers: 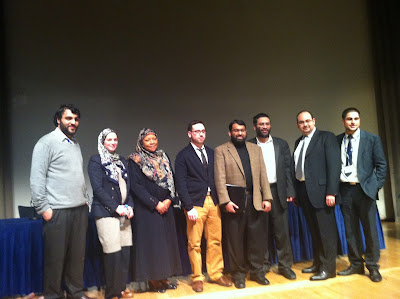