DEBATE: article in The Independent – controversy!

PRINT
A A A
EMAIL

Organisers behind a British conference on Islam and evolution say they nearly had to cancel the event after receiving a torrent of opposition from Muslim students at one of the country’s top scientific universities, The Independent has leanred.

The Deen Institute, a Muslim debating forum which promotes critical thinking, had hoped to hold a conference entitled “Have Muslims misunderstood evolution?” early next year. Among the speakers invited to attend included Muslim scientists, imams who have promoted the compatibility of Islam and evolution as well as those who preach a form of Islamic creationism.
The initial plan was to hold the event next month at Imperial College London, one of the country’s foremost universities for scientific exploration and debate, in cooperation with the local Islamic student society. But the Deen Institute said it was forced to pull out when it became clear that opposition to the event from supporters of creationism began mounting. It is now being held without input from any Muslim student society at Logan Hall, a conference centre owned by the University of London.
“We eventually had to give up of getting any support from student societies because it was seen as simply too controversial,” Adam Deen, co-founder of the institute, told The Independent. Deen, who describes himself as a “conservative Muslim” who encourages critical thinking, said he was surprised to receive such opposition at a place of scientific study, particularly as he had made sure to invite all sides of the debate including those who preach creationism.
“It’s symptomatic of a bigger problem in the Muslim world where people representing practical Muslims have to be seen to be more literalist,” he said. “It’s almost like there’s an intellectual mafia movement who won’t allow any freedom of thought.”
Usman Siddiqui, president of Imperial’s Islamic student society, insisted that they were unable to co-host the event for “logistical reasons” rather than ideological ones.
“I did not say that Imperial ISoc have no qualms with the event - it's just that we did not reach the stage where we were to make that decision,” he said. “They wanted to use Imperial as a venue, it didn't work out, and now they have a new venue.”
However it is clear that opposition to the event has been increasing ever since the Deen Institute began publicising it. One source involved with preparations said: “As soon as it went live I was inundated with complaints. It’s sad because student societies should be desperate to host this kind of debate.”
Mr Deen’s public Facebook account illustrates many of the concerns people raised. In one comment Mohammad Ali Harrath, the founder of the highly influential Islam Channel, wrote: “This debate is a big mistake. It is shifting debate to make it a Muslim issue rather than an issue between atheists and creationists.”
Another commenter, Zeshan Sasjid, added: “Evolution is not Islamic. Prophet Adam did not have parents. A Muslim can’t believe that Prophet Adam.”
However others criticised their fellow believers for being overly literalist and shunning scientific research.
“If our faith is strong we can only gain from looking at, hearing and understanding difference,” wrote Amina Crashaw. “If this were not truth I would not be Muslim. Understanding difference include being open to finding something new to learn from the Qur’an. Not new facts but new depth.”
The row is informative because it illustrates some of the controversies currently occupying the Muslim world about the compatibility of science and whether critical thinking is being closed down by more literalist schools of thought.
Muslims believe the Qur’an is the indisputable word of God and therefore any scientific discovery which risks proving something within their holy book as incorrect is highly controversial, particularly among the more literalist schools of thought. For example, most Muslim scholars have long accepted scientifically proven cosmology but even up until his death in 1999, Sheikh Ibn Baaz, the Grand Mufti of Saudi Arabia, continued to insist that the Sun revolved around the Earth based on his interpretation of Islamic texts.
Until recently evolution caused little friction with the majority of Muslim jurists and academics broadly accepting Darwin’s findings – albeit in a theistic sense. But in recent years creationism – much of it inspired by similar Christian right movements in the United States – has begun to receive wider acceptance.
Much of this newfound enthusiasm for attacking evolution has been pushed by Harun Yahya, a prominent Turkish theologian whose writings have been seized upon by literalists and those who exhibit a theological suspicion of science. Dr Oktar Babuna, a representative from the Harun Yahya movement, is scheduled to speak at the conference alongside Shaikh Yasir Qadhi, an influential imam who accepts evolution at a micro level but refuses to countenance the idea that man evolved from anything other than Adam himself.
Two Muslim scientists, American biologists Ehab Abouheif and Fatimah Jackson, will also speak alongside Usama Hasan, a British imam who preaches the commonly held scientific view that man is descended from ape-like forebears.
Hasan’s inclusion is particularly controversial because he enraged Muslim literalists in his own mosque in Leyton, east London, when he began preaching about evolution and criticised literalists for having a “children's madrasa-level understanding” of science compared to their Islamic forebears who once used to lead the world in such fields. The arguments eventually became so intense he was eventually forced out by hardliners.
In a recent interview with Forbes magazine following a similar conference in the United States, biologist Dr Abouheif explained why he felt it was important to begin challenging literal creationists.
“There’s a lot at stake here because it’s well beyond evolution,” he said. “If it’s not about the evidence, if you reject science, if you reject evolution as a science and you’re not willing to listen to evidence, then that means that for all of science, when it comes into contact with sociological, political conflicts, then you won’t believe it either.”
He added: “What got me out of my seat, my lab chair … is my want of the Muslim world to become innovators and to share in being leaders. In technology and innovation, and share in production. And not just be consumers.”
Posted by Abouheif Lab at 9:49 PM 4 comments:

This is an exciting trailer to the Public Debate that will be held
by the Deen Institute on January 5th, 2013 in central London

Professor Abouheif engages in Public Debate on Islam and Evolution 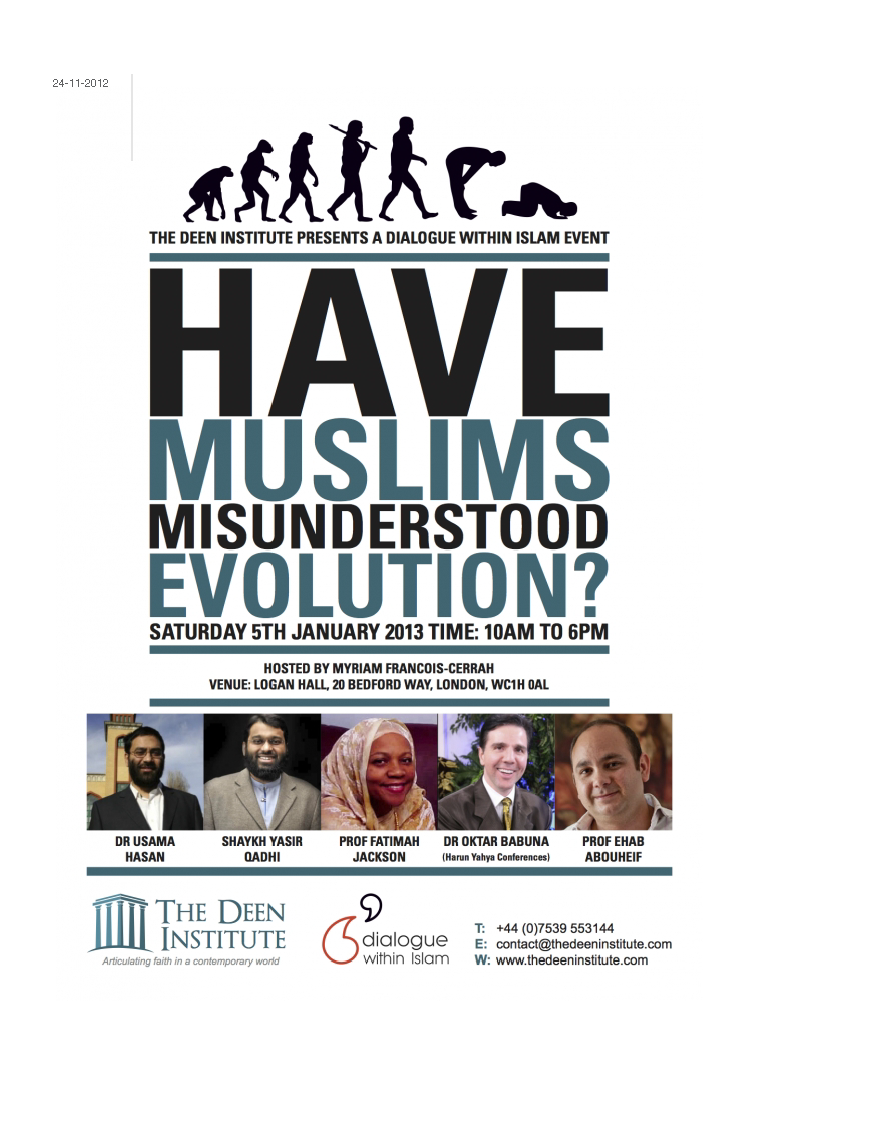 TO REGISTER GO TO:
http://www.thedeeninstitute.com/evolution-conference